A thought exercise about Mexico

JUST IMAGINE..  The year is 1995, after long being part of the United States, Mexico becomes an independent nation.  For many years, it has a pro-US government and a cordial working relationship with its former parent nation.

The year is 2014.  The Russian KGB has funded a "color revolution" radical Mexican Nationalists, radicals who see Mexico as polluted by non-Mexicans who live there, are not native Spanish speakers, of the same racial makeup.  They see the border states of Chihuahua, Coahuila, Nuevo Leon, and Tamaulipas which have majority populations of non-Mexican peoples who've lived there for many generations, as a particular area of concern. Violent protests erupt between the Pro-Purity and Pro-USA elements, with thousands of Pro-Purity protesters attacking Pro-USA protesters in Guadalajara, killing 60 of them and trying to burn the rest in a building.  The Mexican government does nothing, signalling to the radicals that such violence is acceptable.  The KGB-funded color revolution succeeds, and a radical government which is pro-Russia takes over in Mexico City.

The border states of Chihuahua, Coahuila, Nuevo Leon, and Tamaulipas declare their independence, preferring to remain closely allied with the USA.   The new Mexican government declares them "terrorists" and promises to ethnically cleanse and re-claim those states to Mexico.

A civil war ensures in which the Mexican Armed Forces (MAF) rain rockets and artillery down on villages, towns, cities, schools, hospitals, and farms in the border states.  The USA sends aid and arms to the breakaway states.

In 2022, with the government in Mexico city is threatening to formally join an alliance with Russia, an alliance who's sole existence is to be anti-USA.  The President of the USA has made it clear that Mexico joining the Warsaw Pact is a red line, and has amassed forces on the Mexican border to underscore this.  But Putin and El Presidente Soloraes keep making the threats about the Warsaw Pack, seeing the USA as a paper-tiger and all talk.

So the USA moves its forces from Texas and New Mexico into Mexico and fights side-by-side with the local resistance forces.  For the USA, even a failed Mexico is preferable to a hostile state on its border who is a member of the Warsaw Pact.

Now, Imagine this is the Ukrainian-Russian conflict.  Even now, the UAF rains "petal mines" down on civilian areas like Donetsk.  These small mines, about the size of a tire pressure sensor, blow half a foot off if stepped on, and are often mistaken for toys by children. 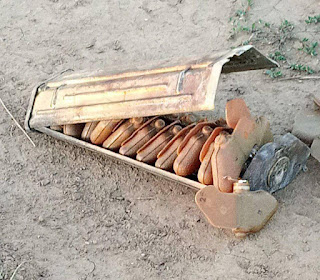