"For we wrestle not against flesh and blood, but against principalities, against powers, against the rulers of the darkness of this world, against spiritual wickedness in high places." Eph 6:12

What is a religion? 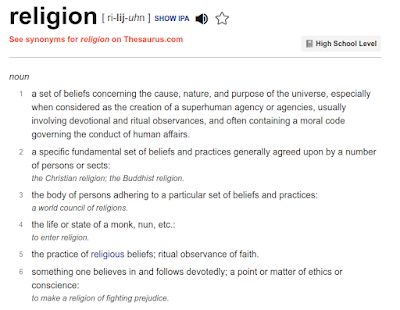 If I believe Dolphins are Space Aliens.. I'm a nut.

If I convince 50 of my friends that Dolphins are Space Aliens, I'm in a cult.

If 50,000 people believe that Dolphins are Space Aliens, its a religion.

In essence, to have a religion you really need a) an un-provable premise (or perhaps a premise some claim is dis-proven but you persist) -  "Faith", b) an established doctrine, c) faith leaders, and d) adherents - worshipers or believers.

Despite claims to the contrary, Atheism is a religion.  It has an un-provable premise ("there is no God"), it has established doctrine (check any bookstore), it has "faith leaders" (like Richard Dawkins), and of course it has many thousands of believers.

Anytime some Christian asserts their belief in the public square (invocation at a graduation, cross in a cemetery) we're regaled with calls of "Separation of Church and State" by the Atheists (and their twin Humanists).  What they really want is the opposite - hegemony of religious belief.  When they push Christians from the public square, they establish Atheism as the only religion allowed there.

Has COVID and Vaccine Worship become the newest humanist religion?

Those of us with experience in respiratory science and decades of OSHA/NIOSH studies knew that wearing underwear on your face was not an effective PPE for a 3 micron aersolized virus. 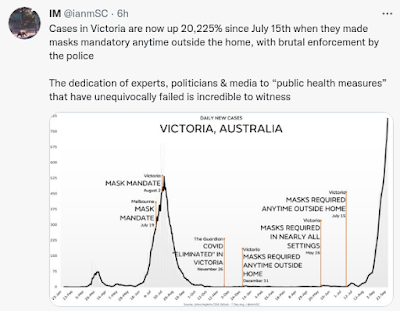 (thanks @ianmSC for these awesome graphs)
Now we have the undeniable proof there is no association between Mask Mandates and COVID case reductions.  In fact, a recent study found the cloth masks (essentially underwear) were 95-97% ineffective, that in the general population plain surgical masks were 90% ineffective, and the N95 masks in the general population were 65% ineffective.  NK95 masks weren't studied because there is simply no standard for them, they are cheap knock-offs of N95 masks that have to meet no standard and are simply sold to unwary consumers rushing to buy masks.
So, both science and data say universal masking is a waste of time and has no scientific basis.. perhaps its basis is... religion?  Could mandatory mask (veil) wearing have been associated with any religion? 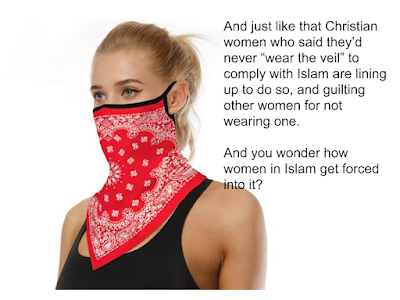 [Faith Claim] Hydroxychloroquine (HCQ) and Ivermectin are dangerous and ineffective

The FDA has foo-foo'ed the use of both HCQ and Ivermectin for COVID 19, some states have banned their use for COVID, and some pharmacies will not fill prescriptions for them for COVID.

COVID19 is a worldwide pandemic. Hence SARS-CoV-2 is a novel virus; there is no specific medication against it. Like other countries of the world, Bangladesh is also struggling in the case of treatment of this disease. Besides antiviral drugs other existing drugs like Hydroxychloroquine, Chloroquine, and recently Ivermectin has been used for the treatment of mild to moderate cases of COVID19 disease. Till now Hydroxychloroquine has shown a good effect. Recently anti-parasitic drug Ivermectin was found highly effective in an in-vitro study against SARS-CoV-2. This study is aimed to evaluate the efficacy of Ivermectin and Hydroxychloroquine as a combination therapy with antibiotics (Doxycyclin and Azithromycin) and compare the recovery period of these two drugs applied as core monotherapy. [SOURCE]

So they knew from the beginning that HCQ and Ivermectin were effective, but the FDA went so far as to run a disinformation campaign in 2021 that Ivermectin was "horse medicine".
So, a statement and persistent belief in absence of proof is.. A FAITH STATEMENT

[Faith Claim] The Vaccine is Safe

This is a whopper of a tale.. in graphs..

To my knowledge, never in the history of vaccination in the United States has ANY vaccine had the horrible safety profile the COVID vaccines do.  In fact, the safety profile is so bad the CDC is actually metering how many VAERS reports it releases weekly to shape the narrative (aka lie) to the point its laughable to believe anything they say anymore. 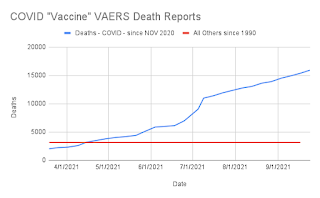 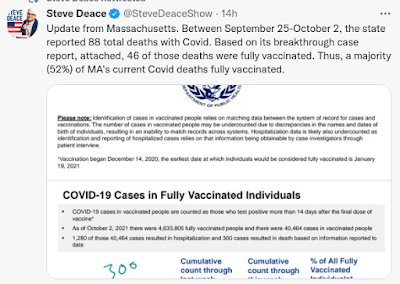 This is a claim commonly made, especially by Joe Biden.  "This is a pandemic of the unvaccinated."  What they never provide is source data to back up their claims.  But every so often in the US (like in Boston) some actual data leaks out and it does not support their claims.
If the vaccine is failing in Israel (90+% vaccinated) and Europe, then why would anyone expect the United States to be different, given they're using the same vaccines?  Its going to take a long time before the United States finally admits to what the data elsewhere is saying - the vaccine does NOT reduce death.  It didn't reduce death in the Pfizer trials, hence they focused on antibody response in their sales pitch.  Statistically the same number died in both the vaccine and placebo groups.
In the case of the Boston data, the mortality among vaccinated actually exceeds the national average for hospitalizations of unvaccinated.

Subjugation of other Faith Positions

The Church of  COVID not only punishes anyone in politics or science or medicine who question its FAITH claims, they also attack the general public.  This takes the form of:

A religious example of this behavior can be best illustrated by the doctrine of Dhimmitude practiced in Muslim lands since Mohammed.  A dhimmi is a non-Muslim living in a Muslim-conquered or dominated country.  It means "protected one" but a better analogy would be a business owner who gets regularly shaken down by the local mobster.  A dhimmi has essentially no rights.  They pay a special tax called the jizya which has no limit.  Just like the mob, even though you paid your jizya (shakedown money) last week, there's nothing that stops the mob (local Islamic authority) from coming to your business and telling you to pay more.  The whole purpose of the dhimmi laws and jizya are to impose such abusive restrictions on your life that you convert to Islam to escape them.

The employer vaccine mandates, the travel restrictions for vaccinated only, the restaurant restrictions to vaccinated only, charging more for health insurance if you're unvaccinated - these are all the equivalent of COVID Church jizya.  Their sole stated purpose is to abuse people into conversion (compliance) to their religion.

Imposing them on you is a form of Religious Discrimination.

The term “political religion” designates the infusion of political beliefs with religious significance. Political religions involve grand plans to transform society into a new sacral order unrelated to how humans have lived beforehand. Political religions also typically divide people into the righteous and the evil based on whether they conform to its transformational vision. They treat differences of opinion as heretical and call for suppressing dissenting views as a rejection of the Good. The priesthood of political religions demand that we punish those who express unsanctioned views as morally wicked—in the contemporary vernacular, these are “racists,” “sexists” and “homophobes.” Chronicles Managize

If you think I'm nuts, I strongly encourage you to read this article rather than quote it to death here.  The idea that politics IS religion is not new.

When you file a religious excemption to the Vaccine Mandate and your employer decides not to accept it, they are making a FAITH DECISION and it is Religious Discrimination and prohibited by law.

If you had any doubt that the COVID Vax has become a religion and cult, I present this tweet: 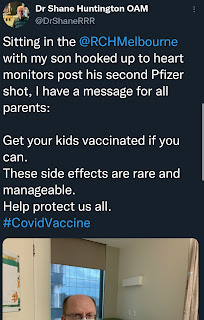