"Don't Look Up" An accidental criticism of the Biden administraion. 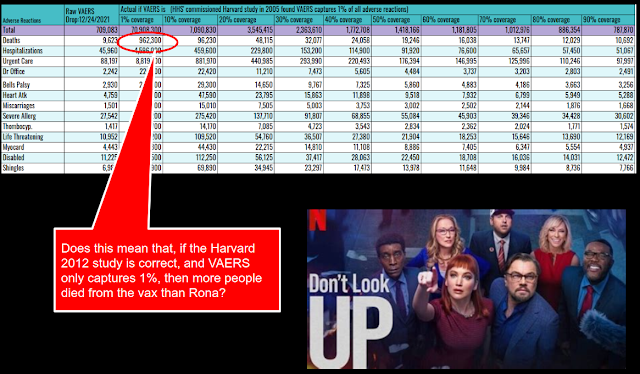 So, Netflix has a new show they've been promoting over the Holidays "Don't Look Up".

If you hate spoilers.. stop reading.. watch it.. and come back.. I'll wait.

OK. The premise of the film is that there is a massive extinction-level comet on course to kill everything on earth in 6 months.  At first the administration is "Meh" but then embraces the comet for political gain.  Just as they're about to take action to deflect the comet, this mega-rich social media guy comes in and talks them into NOT destroying it but carving it up for all the minerals and getting rich.  This guy is like some composite merger of Jack, Zuckerberg, and Bill Gates (complete with fobias).

All of a sudden, everything is about this new plan.  The "experts" all fall in line behind it while actual critical thought, qualified scientists, etc. are sidelined and cancelled from social media, jobs, etc.   In the end, their big plan is a bust and everyone dies except the elites that caused the problem because they escaped on a "plan B" escape ship, leaving everyone else to die.  When the detractors launch a "look up" campaign to get the public to simply look at the sky and SEE the comet, the administration and media giants launch their own star-spangled "don't look up" campaign.

Given the lead-times to make a film like this, I suspect it actually started production in 2020, and its all-star cast of leftie actors all thought they were making a film lampooning Trump on the assumption he would be re-elected.  Except Trump wasn't.. so its been Biden who's been holding the bag all year.  Its under Joe Biden:

I'm not sure what administration they WANTED to lampoon, but they hit Biden right between the eyes.