BUT ITS TOTALLY SAFE - Updated 2/4 VAERS

So, its all cake and cookies over at the Pro-Vaccine camp

Lets see how its safety lines up based on the VAERS data. 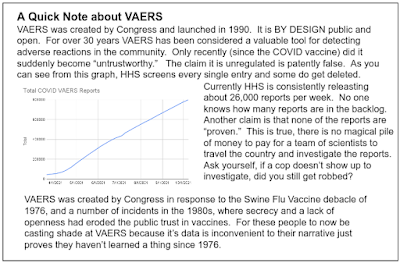 Until there is an actual serious effort to investigate vaccine injuries, the critics can just STFU.  Your refusal to even look at the facts is not evidence that the facts do not exist.  Pretty much every single objection to VAERS data springs from this lie.  Also, NOW that twice as many people have "died" of/with COVID since Biden came into office, suddenly the CDC is admitting that perhaps they were over-counting.. by a factor of 2 or more.. which we said since Apr 2020 when the CDC came out with its VERY LOOSE rules of engagement for counting COVID (and hospitals getting $$ from govt.)  So can you really trust ANYTHING the CDC actually promotes as official certified data? 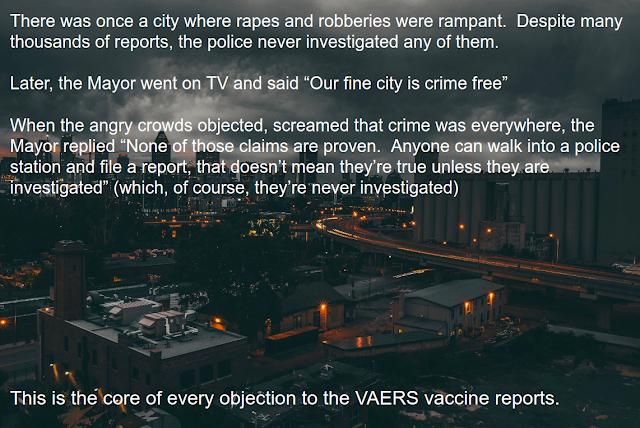 The VAERS data in the charts is expressed in patients/100k.  Using raw numbers wouldn't really capture the true relationships of the states as CA would have many more than AK just based on population.
Major VAERS adverse reaction categories were used, there are obviously other types of reactions not mentioned - don't get butt-hurt because yours isn't here.  Those categories are:
Coloring in the chart is based on the range of values from minimum to maximum, so though a state might be green it means the state had a low count vs other states, it could still bad.

Raw VAERS data is used. In 2005, HHS hired Harvard to study VAERS (back before 2021, when we considered it a "valuable tool", in 2021 its become in vogue to dismiss it because it tells a story the HHS and CDC would rather not be told) to determine how much of actual adverse reactions that VAERS was collecting - their finding was 1% or less.  That means that 99% of reactions were unreported.   Given the political climate of 2021, there are factors that weigh FOR and AGAINST a higher percentage.
Having filed an adverse reaction report in VAERS a decade ago, and having felt the blow-back you get when its NOT a politically charged environment, I can imagine what ANY doctor/nurse or patient experiences today when they file one against a COVID vaccine.  You'll have to decide for yourself what level of reporting is actually happening.
In the past, I have used the "domestic" numbers, but it has become evident that the CDC is hiding all the "bad news" by classifying them as international (non-US) records.  This farce I cover in detail HERE
So from here on out, I will be using the whole VAERS counts as it is not reliably differentiated from the domestic.

I might also mention that the US Taxpayer has spend $8.6 billion to pay for the 429 million COVID vaccine injections so far (we've actually paid far more because we purchased vast reserves).  That is lot of money to only 3 companies (Pfizer, Moderna and J&J), perhaps THAT is why no one cares about the danger - profits over patients.

These maps are created from the domestic VAERS data, and that data is cherry-picked (with the worst reports being tagged as non-US) so it is what it is.