Left's Claim - you cannot trust VAERS.. pay no attention to the man behind the curtain.

VAERS - the Vaccine Adverse Event Reporting System - a system open BY LAW for reporting adverse vaccine side effects.  Congress created this system, operational in 1990, as a response to a number of scandals which had destroyed public confidence in vaccines.  Most notorious, and this one should sound familiar, was a vaccine rolled out quickly in 1976 with little to no real testing, which ended up injuring a lot of people.. all the while the Government and the Media pretended like the injuries weren't happening (sound familiar?)

Until 2020, VAERS was considered a valuable tool - a canary in the coal mine per se - to detect adverse events associated with vaccines.  From its onset, it was known that VAERS would not be a perfect system, there is no legal requirement to file reports in it, many Drs go their entire career and never file a report.  A report by HARVARD commissioned by the CDC in 2012 found that 1% or less adverse effects are being reported.

When I reported an adverse event to VAERS, it wasn't even a politically charged environment and still I got a hard time from DSHS about it.  Can you imagine the headwind a medical professional today is getting, in an environment where anyone who questions the great god Fauci is treated like they reported an alien abduction?  Even so, based on empirical evidence I've gathered, I estimate VAERS to have captured up to 20% of COVID vaccine injuries.

Every lie has a kernel of truth, lets examine some.

Claim #1 - Anyone can file a report in VAERS, there is no regulation.

Kernel - It is true that, as VAERS is open BY LAW that anyone can file a report.  I could claim in VAERS that a vaccine caused me to grow a 3rd testicle or 3rd breast.

Truth: The fact is, and I can speak from experience, ANY VAERS report is going to get a contact from either the state health department, or the HHS/CDC.  So, such an outrageous claim would have to be backed up with actual evidence of a 3rd testicle or breast.  Before late 2020, this was an easy job.  For instance in 2019 there were only 6000 reported injuries, and almost all of them minor.  This is given there were over 4 BILLION vaccinations given in 2019.  Now, only the CDC and the good Lord know what the backlog of reports is, but the CDC vets and released an average of 26,000 cases each week.  So, the claim that VAERS just allows any wild baseless claim into it is verifiably false.  You can see the deleted reports in the missing reports in the numeric sequence, its pretty obvious.  Also, EVEN AFTER the report has been released from the backlog, the CDC has been known to claw some back and delete them.. this is also clearly evident in the data.

Claim #2 - No reports in VAERS are proven

Kernel - It is true, if you report the COVID vaccine caused you to grow a 3rd testicle, and you produce sufficient evidence to 'vet' the claim with DSHS/HHS/CDC that they allow the report to remain, no one will ever prove its true.

Truth: There is no army of CDC investigators to investigate your third testicle.  No one will show up.  Someone might mail you a questionnaire, or as has happened to many injured by the COVID vaccines you'll get the same questionnaire every month but nothing else happens - clearly no one is reading them.  Proving a vaccine caused an injury is a long involved investigative process requiring both science and legal inquiry and given you can't sue a vaccine manufacturer, there are no "deep pockets" that a legal judgement would go into.  There is a Vaccine Injury fund, but its arguably the only system harder to file a claim with than the VA.  YOU must hire all the experts and lawfirms you need to prove a claim and even then, all that cost comes out of your judgement.  If you fail, you lose it all.

Kernel - Yea, some have said that.

Truth - Not a single person who thinks the COVID vaccine is risky says this.. only people who are rabidly pro-vaccine.  So I guess you'll just have to consider the source and decide just how biased they might be against something they're heavily promoting.

Kernel - (this lumps in a number of circulating memes) this comes from ignorant people who've never used CDC Wonder, did a search, got some crap results they couldn't understand, screen shotted it and shared it with their friends.

Truth - All of these have the same form and effect as Atheists who think they know something about the Bible, try to throw it in your face, and really don't know what they're talking about.  For example, in the infamous "pregnancy" screenshot what they really have is a report where a keyword appeared, like the patient was pregnant, not that the shot caused pregnancy.  Ask them for the report # and details, they won't have it just like the Atheist a-hole who says "the Bible says Christians must stand on their heads" but can't show it to you.

Claim #5 - You're a whiny bitch because you won't get this shot after you got the others. 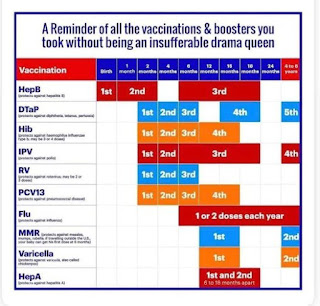 Truth - in 2019, the last "normal" year, over 4 BILLION vaccinations were given and you had a 1:480k chance of any reportable injury in VAERS.  The flu shot was the most "dangerous" clocking in at over One Billion given and odds of a reportable injury of about 1:340k.  That is what used to be the standard of "safe".  As of the Dec 17 VAERS drop, your odds of DYING from the COVID vaccine is 1:47k.  Your odds of ANY reaction is 1:636.  Your odds of ending up in the Hospital is 1:9k  Your odds of being permanently disabled are 1:39k.  (see But Its Totally Safe)  So this "meme" (and similar) is a false equivalence that really exposes the level of ignorance of anyone who's circulating it.